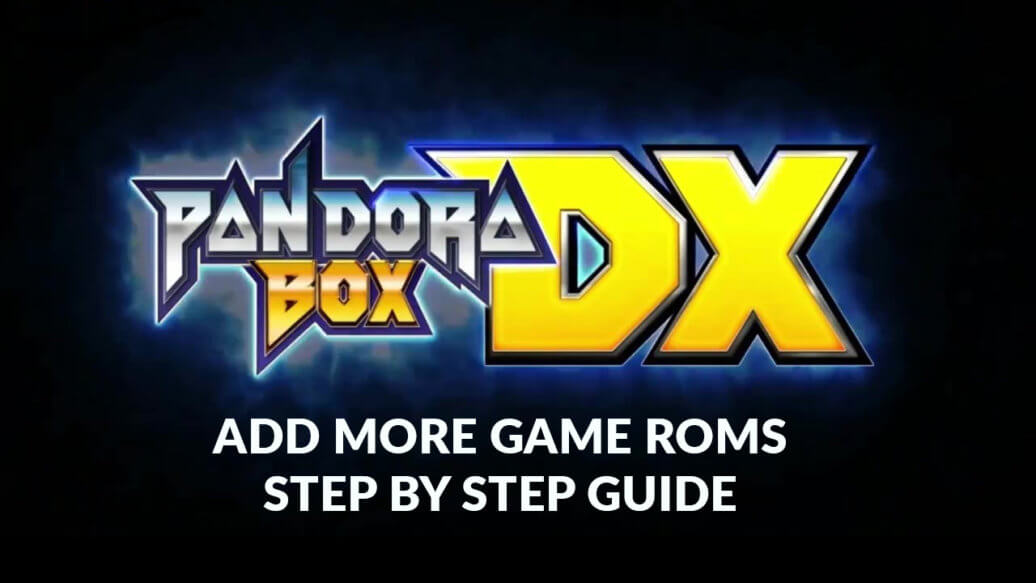 We have been seeing a lot of people asking about how they can add their own games to the Pandora’s Box DX lately, so let’s talk about it. Before we get to the meat and potatoes though, there are a few considerations to make.

A Few Thoughts Before Starting

Before you start heading down this path, there are a few things I would like you to think about first and then I will make a recommendation.

You have the ability to add your own games directly to the SD card if you wish. You can also just use a USB stick for new games you want to add and leave the original 3000 on the SD card. You could decide to buy a larger SD card (original SD card is 32GB) and copy the contents of the original one over to give you more space for games, save files, etc… Or you can even copy the full contents of the SD card to an external USB stick and remove the PBDX SD card entirely and keep it somewhere safe as a backup. In all these scenarios, you’ll still be able to play all your games.

Why is any of this important?

Because the route you decide to choose here will affect how easy it is to work with the PBDX in general when it comes to both adding new games and fixing some of the issues some games have. Personally, I don’t want to dismantle my entire arcade stick and then open up the Pandora’s Box DX to get to the motherboard anytime I want to install a game. That’s a lot of work and effort to do something that should be simple.

The PBDX SD card has about 2GB reserved for save files, but that could eventually be exhausted depending on how many games you play or add. Also, let’s say you wanted to back up your high scores. There’s the hassle of pulling the SD card out of the box every time you want to do that.

Here’s what I’m doing: Copy all files from the SD card to an external USB stick, remove SD card from PBDX and keep somewhere safe for backup.

For someone like me that is taking a lot of time to learn and tinker with things on the PBDX, being able to do everything from the external USB stick is a godsend and makes things so much more streamlined. It’s a major reason why our PB6 hack basically redirects everything to the USB stick – to make things so much easier to change.

Once you’ve decided how you want to proceed, let’s talk about actually adding our own games.

Let’s Get to Adding the Games

The good news here is that regardless of the path you’ve decided to take, adding your own games works exactly the same way: Create the folders that the PBDX looks for on the root of your preferred FAT32-formatted medium and drop your games into those folders. That’s it.

What folders does the PBDX look for added games in? What kinds of formats are supported?

The SD card already has these folders created for you so you can proceed to dropping the games directly into the folders. You’ll need to manually create them on your external USB stick if that’s the route you’ve decided to go.

Is there a community collection of working ROMs just like what you’ve done for the Pandora’s Box 6?

No, not yet, but it is definitely in the plans. If you are interested in contributing, please feel free to let me know.

I’ve added a PlayStation game and it doesn’t get added to the game list.

Does PS1 game Einhander work on the PBDX? What about the PS1 versions of NFL Blitz that would crash on the PB6? Do we still need to disable vibrations to avoid crashing the PS1 emulator?

Einhander does indeed work on the PBDX. Yes, the PS1 versions of NFL Blitz all work. No, you do not need to disable vibration manually as the crash was fixed. (YAY!)

I’ve added a Genesis/NES/SNES game but it does not launch and returns immediately to the menu.

The problem here is likely in the filenames of your games. Spaces, underscores, parentheses and quotation marks are all known characters that will cause problems in your gamenames so you will want to remove them. If you are using zipped ROMs, this goes for not just the zip name but also for the ROM inside of it.

Why aren’t my games alphabetized? How do I order them better?

So the way the PBDX works is very much like the PB6 in this regard. Your default 3000 games always come first on the list followed by the games you’ve added. For added games, the order of games is like this:

However, the PBDX will display the files from each of those directories in file write order, because for some reason when you grab a set of files to write to a USB stick, Windows does not write them out in alphabetical order because that would be too easy. You can easily use a program like DriveSort to sort the files alphabetically without needing to recopy your files back over. Once you’ve used DriveSort on each of your directories, you’ll have each ROM folder alphabetized. (I may write up a little tutorial on DriveSort. In the meantime, all you really need to do is open your USB stick in the program, select Sort and Save from the menus. Do this for each folder you wish to sort and you’re done.)

Sidebar: Why is the MAME version supported older than the PB6? Isn’t this bad?

The Pandora’s Box 6 used MAME 0.106 and the Pandora’s Box DX is using MAME 0.78. No, it isn’t bad. It’s basically a tradeoff. As MAME progresses and matures, it gets more accurate over time and also requires more powerful hardware. For boards like the Pandora’s Box, speed is essential so using an older version is more desirable on this level of hardware. You may lose out on some games and bugfixes that were added after the version being used, but it means that games you may not have had enough speed to run before will run now. This is especially true with the various Midway arcade games (NBA JAM, Mortal Kombat 2, etc…) which struggled to play well on the PB6, but now play beautifully on the PBDX.

I would highly suggest getting a PC and running latest MAME instead if you are able to do so as that would blow away a Pandora’s Box any day, but if you’re on this hardware, you have little choice in the matter than using older MAME builds.

Adding more Sega console games? Why does this work?

When the Pandora’s Box DX was created, it was clear that 3A decided to throw away most of the work they had done for the Pandora’s Box 6 and start anew. Instead of creating frankenstein-style combinations of emulators and the main frontend with a chip controlling launching games, they decided to go with something a lot more straightforward and simple. As the operating system is all held on a 1Gb NAND, it means that very few people will be able to tinker and change things, so a lot of the security systems that were in place on the PB6 weren’t carried over to the PBDX.

The PBDX uses a lightly modified version of Retroarch with most of the modifications I’ve seen to this point mainly focused upon allowing the per-coin timer to work with Retroarch. The PBDX launches Retroarch through passing the game name and the libretro core to run it, just as almost any other frontend would launch it.

Something that wasn’t taken into account is that the Genesis Plus GX libretro core being used on the PBDX also supports other consoles as well and since .zip is one of the accepted file extensions for the roms_md directory, we’re able to take advantage of this to add Sega Master System, Sega Game Gear and Sega SG-1000 games to the PBDX.

How do I add these Sega games to my PBDX?

“When I try to run the game from the menu, it either does nothing or immediately quits.”

Most likely you have some strange character in the file name that needs to be removed from either the ROM file name or the zip file containing it.

“Do I absolutely have to zip up the games to make them work?”

For running Sega Master System/Game Gear/SG-1000 games, yes, you must or else the main menu system won’t recognize the files and won’t add them to the game list at all.